At the beginning of the year I bought an u-blox7 USB-adapter to try out how good or bad the position can be tracked by my laptop or an raspberry pi. The USB device supports GPS and GLONASS.

First I tried it inside an ÖBB Railjet (train) but it failed completely. It found satellites but none of the signals were strong enough. So my first thought was, that it can be either a bad signal or the stick is bad. Since it works at another place the problem probably has to do with the train.

How to get it running

We need gpsd, which can be installed via the following command:

After it has been installed, it can be used by applications. It seems like it plays very well with my distribution because the daemon is launched when it is needed (as soon as I plug in the stick, gpsd will be started and applications can query position information).

When xgps runs, you can see the satellites, from which you receive data. As an alternative, you can run cgps, which shows something like the following: 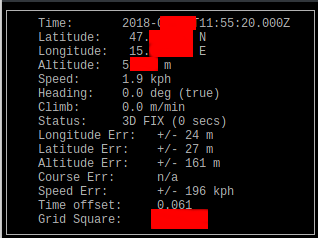 Please note that some time is needed until you will get a fix.